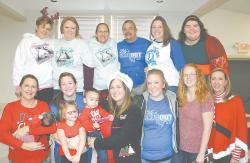 METAMORA — What started as a quest to ensure a few hundred foster children in the Thumb area had a great Christmas morphed into a movement that, to date, has reached nearly 350 kids. To make the upcoming Christmas season a little more festive for foster children in Lapeer County — as well as in Wayne, Oakland and Genesee — Lapeer-based charitable group Justice for Lily organized volunteer sponsors to purchase gifts as part of their yearly event, the Angel Lily Christmas.

The group aimed to provide gifts to 250 children this year, but because of an outpouring of support (and a little fuzzy math), that number has grown to 348. “We try to get started working on An Angel Lily Christmas as early as possible and this year we decided we would start in early October,” said Justice for Lily committee member Heather Woodfield. “Lauren (Furneaux-Bass, Justice for Lily founder) started reaching out to Lapeer DHS first since we are in Lapeer County to see how many kids they had for us. Then she reached out to Genesee, Oakland and Wayne. Pretty soon we were up to over 200.”

Woodfield said she received a call from Furneaux-Bass stating that the organization already had more sponsors signed up to donate than children signed up to receive donations, and the group reached out to sign up more children. “A couple days later she called me back and said ‘um, I miscounted the first time, I missed a section my binder and we now actually have 350 kids,’” said Woodfield. “This of course, was before we have the extra space we have now.”

The extra space, said Furneaux-Bass, was a necessity. In years past, the organization staged donations in the home of Furneaux-Bass’s mother, Lynette, and as the event grew, so did their need for more space.

“Going from 116 kids in 2016 to 346 this year is amazing, however we knew very early on we did not have the space to make this happen,” said Furneaux-Bass. “One night a few of us were at my mom’s house sorting through some bags when we realized this was just not going to work. We were tripping over each other, items were everywhere and there was just no room.”

One Facebook post asking for an available space later, and the group was able to move the operation into a vacant storefront in Metamora. “That is when Shawn Brecht, owner of The Pickle Barrel of Metamora, offered us the space we are currently using,” said Furneaux-Bass. “There is no way we would have made this happen without this space. Thank you so much Shawn Brecht.”

Much of the funds raised by Justice for Lily throughout the year, including the money raised during the group’s yearly Princess Ball, are used for the Angel Lily Christmas. This year, more than $22,000 was spent to ensure the adopted children received the best possible Christmas. In addition to the money, the group credits their loyal volunteers with providing the hours and enthusiasm that makes Angel Lily Christmas a reality.

“We then get sponsors for these children, we ask that each sponsor purchase at least $100 of items from the child’s wish list.” After that, the groups set out collecting the gifts from sponsors. “We then inventory what is in each bag and make a list of what the child didn’t get, compare them to each sibling in the house and go out and shop again,” Furneaux- Bass said. “Once the bag is set we tag them with a certain color depending on what county they are in.” Leading up to the time when gifts are set to be delivered, Furneaux-Bass and her volunteers “check, re-check and check again” to ensure no child was missed.

According to Furneaux-Bass, the youngest foster child sponsored is only barely a month old, and hundreds of individuals and businesses, both local and even abroad, chipped in to provide each of the 348 sponsored kids with a happy Christmas. “We know we are making a difference when we get to hear from the foster parents and even the children themselves,” said Woodfield.

According to Woodfield, during an Angel Lily Christmas event in the past, the group had adopted a 16-year-old girl, who arrived with her foster parents to pick up her gifts. “She approached us with tears rolling down her cheeks. This was the first year she received any Christmas presents ever…(at) 16 years old,” said Woodfield. “Or be told that the only thing the child asked for was anything but coal because her biological parents told her that was all she was worth.”

On Saturday, Justice for Lily hosted Breakfast with Santa, a free event that allowed families to enjoy a pancake breakfast while children could get their photo taken with Santa. The event also served as an opportunity for Lapeer County-based foster families to pick up their gifts. Gifts have also been delivered to Genesee County-area families, and yesterday, the group made their deliveries to Wayne and Oakland counties.

“We have two more to take to Genesee County and then 2017 fosters are done, very stressful but well worth it,” said Woodfield. “Knowing so many children will have smiles on their faces all because of a tragic death of a two-and-a-half-year-old child.”