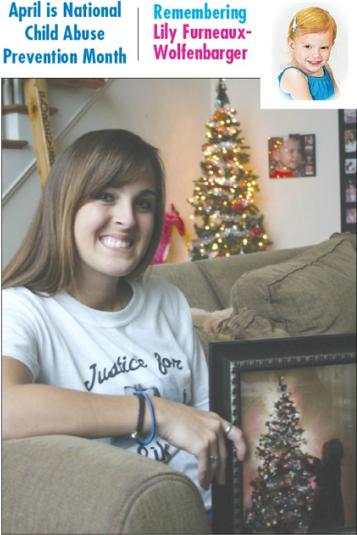 God Left Me Here To Help Other Children

The night before the 2-year-old went to her father’s home for the weekend she helped decorate a Christmas tree in the corner of the living room at her grandparents’ Baldwin Road home.

“That Christmas tree will be up forever,” said her grandfather, Chico Furneaux, sitting in a room lined with large portraits of Lily.

“She was so happy and full of life,” said her mother, Lauren, sitting across the room with a blue hair extension clipped in her dark brown hair to remind people that April is National Child Abuse Prevention Month.

Lauren Furneaux’s father is raffling off a .45-caliber Winchester Model 94-AE Trails End lever action rifle. It’s one of only 10 commemorative guns engraved with the name of Lapeer County in the stock.
Photo by PHIL FOLEY
Police in New Haven say Lily’s 28-year-old stepmother, Renee King, sexually assaulted the child before beating her to death Nov. 20. King has been held in the Macomb County Jail since, charged in Macomb’s 42nd District Court with felony murder, which is punishable by life in prison upon conviction; first-degree child abuse, a 15-year felony; and firstdegree criminal sexual conduct penetration with injuries involving a child below the age of 13, a life felony that carries a minimum of 25 years in prison.

Noting that King has yet to be formally charged in Circuit Court, Lauren and her family are reluctant to discuss her relationship with her ex-boyfriend, Jeffrey Wolfenbarger. Lauren would only say, “He lived a different lifestyle.”

While the charges against King work their way through the Macomb County courts, the Furneauxes are working to keep Lily’s memory alive with a website, www.justiceforlily.com and a Facebook page, Justice For Lily, and a string of fund raisers — mainly for the Lapeer Child Advocacy Center.

At Lily’s funeral at Lapeer’s Immaculate Conception Church, recalled Lauren, Fr. Aaron DePeyster told her, “‘You have a purpose. You can be a voice for children.’ I left the funeral with a peace that Lily was okay now and was with God and I had a purpose. God left me here to help other children.

“I don’t want Lily to be forgotten by the world and she’s going to save lives. That’s my way of keeping her alive by saving other children’s lives.”

Lauren, a 2005 Lapeer East graduate, earned a bachelor of applied arts in event management at Central Michigan University and is using those skills to organize a series of events in Lily’s memory.

The first was a candlelight vigil at Immaculate Conception’s memorial to aborted children by the church steps on Dec. 19. Since then she’s held a pizza night at Greg’s Restaurant in Metamora Township and monthly skating rallies at the

Yesterday a Momto Mom Sale organized by Lauren was held at Davison’s Life Fellowship Chapel and a Scrap Crop event was held in Frankenmuth. “We have events almost every weekend this month,” said Lauren.

The big event, however, will be a benefit dinner May 14 at the Metamora Lions Club to mark what would have been Lily’s third birthday. “We’re still looking for silent auction items for that,” she said.

Later in May Lauren is planning a 5K walk/run at Lapeer’s Rowden Park and in June she’s planning a golf outing in Oxford and a Zumba event in Lapeer.

Lauren’s father is raffling off a .45-caliber Winchester Model 94-AE Trails End lever action rifle. It’s one of only 10 commemorative guns engraved with the name of Lapeer County in the stock. He plans to hold a drawing, probably around Father’s Day, when the last of his 250 $20 tickets are sold.

Funds from those events, said Lauren, will go to help fund the Child Advocacy Center in Lapeer.

“If we could save one child, that would be amazing,” said Lauren. “Nobody wants to bury their child. She was my world.”

For more information on Lauren’s fund raising efforts, call her mother Lynette at 810-614-3007.