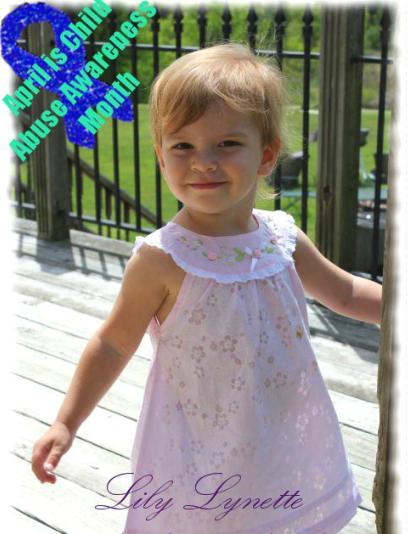 Lily Lynette Furneaux-Wolfenbarger passed away on November 20, 2010, while in the care of her stepmother, Renee King.  Lily, born on May 14, 2008, died from blunt force trauma resulting from being struck in the head by an unknown object after being sexually assaulted by multiple objects.  Renee King, allegedly the only one present in the home at the time of Lily’s death, is being charged with felony murder, first-degree child abuse, and first-degree criminal sexual conduct (The Macomb Daily).  Lily’s mother, Lauren Furneaux, has waged a battle to gain awareness of Lily’s story, increase prevention of child abuse, and keep Lily’s memory alive.  Justice for Lily, a group begun by Lauren and her family, has taken to the streets, the media, the Internet, and has a wide-reaching support-base of greater than 11,000 members on Facebook alone.  Armed with shirts, wristbands, and beautiful lily flowers, Lauren has immersed herself in the community representing Lily and her beautiful, short life.

April is Child Abuse Awareness month.  Statistically speaking, a child is reported abused every ten seconds in the US.   Child abuse is not limited to socioeconomic status, race, religion, or level of education.  Anyone can fall victim to child abuse.  Sixty-eight percent of children who are sexually abused are abused by their family members.  It is believed that thirty percent of abused children will one day become abusers themselves.  Kids who have been abused are twenty-five percent more likely to end up engaging in teen pregnancies and are 2.5 times more likely to become alcohol abusers and 3.8 times more likely to be addicted to drugs.  Child abuse is a staggering epidemic.  It’s cruel, damaging, and expensive.  It has been determined that child abuse (and neglect) cost the US $104 billion in 2007 alone (Childhelp Statistics).

Child abuse has a face.  Lily was a little girl.  She was a vibrant, glowing, and happy two and a half year old.  She loved the movie Toy Story and loved to sing/dance.  Lily loved her mommy and had her whole life ahead of her.  I didn’t know Lily well, but I met her several times when she was a small baby.  She was always a happy baby!  She was a month older than my former foster daughter, and her mama and grandma attended a La Leche League meeting I also attended.  Lily’s mommy didn’t know that she would never see her again when she dropped Lily off at her dad/stepmom’s house that dreadful Saturday morning for a routine visitation.

Child abuse is 100% preventable.  Not a single child ever needs to die as a result of child abuse or neglect ever again.  One of the greatest things we can do to reduce and eliminate child abuse and neglect is to raise awareness and provide support to fellow parents.  Research has shown that parents are more likely to abuse their children when they feel isolated or feel they have no support (Child Welfare Information Gateway).

As parents, it is important that we stay in-tune with our children, whether they are our children by birth, marriage, foster care, or adoption.  When we are charged with caring for small children, it is a big responsibility.  As adults, it is our job to guarantee they are safe and that they have every opportunity to grow up healthy and strong, both physically and emotionally.  As parents it is also our responsibility to help kids we don’t have in our care.  I believe it falls on every person out there to help watch out for the kids around you.  If you see or suspect child abuse, don’t hesitate to contact your local child protective services agency; it’s not your job to know whether or not abuse is happen – leave that to professionals to discern.

As a parent, learn and know your limits.  Count to ten or sit in the bathroom by yourself for a few minutes to take a time-out if you’re getting stressed.  Learn about the developmental limitations of each age; only require those tasks which are developmentally appropriate and respect a child’s limitations.  And never hit a child; child abuse and parental aggression is believed to be on a continuum.  On one end is mild parental aggression while on the other is physical abuse (Kandel).  Therefore, it’s very difficult for parents, in a moment of anger and aggression, to clearly discern limits.  It’s much safer, much healthier, simply to enforce a no hitting/no physical aggression rule in the household overall.

And support those other parents in your community who need the help.  Offer help in childcare, household care, or other day-to-day tasks for a parent who may be at risk.  Be a shoulder to cry on or an ear to listen when they are in a moment of despair.  Become a foster parent in your community.  Become a Court Appointed Special Advocate (CASA).  Do something; make a difference.  Most importantly, LEAD by example.

Lily should never have died.  Lily should be alive today.  A mother so young should never have to bury her two year old and attend the trial of the woman suspected of murdering her.  Lily has a face, has a name, had a life.  As you move through your month, remember Lily.  Remember Lauren, her mama.  And hug your children closely.  Use your words gently, and never your hands in anger.  Respect your children; they are little people who have limitations, preferences, and needs just like you and me.  Together, we can work hard to bring child abuse rates down.  Kids around the world deserve it.

Physical Punishment and The Development of Aggressive and Violent Behavior: A Review.”