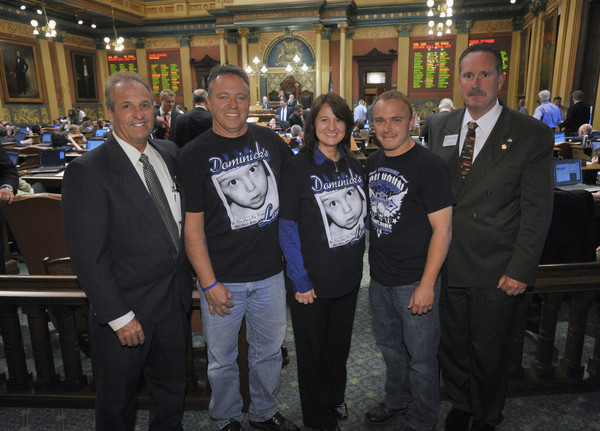 It is a great day in Michigan today for our children. Dominick’s Law was passed and ready to be signed. Stricter punishments for child abusers. Dominick you are saving lives. You and Lily are our heros.

The Michigan House today gave final approval to legislation known as “Dominick’s Law” that will strengthen penalties for child abuse in Michigan and create penalties for abuse in front of other people.

The legislation, sponsored by state Reps. Matt Lori and Joseph Graves, are in memory of Dominick Calhoun, a 4-year old from Argentine Township who was beaten to death in 2010, in the presence of his older brother.

“Passing this legislation is a big victory for ensuring the safety of Michigan’s children as it demonstrates that child abuse will not be tolerated in our state,” said Graves, R-Argentine Township. “I hope that sending these bills to Gov. Snyder will also allow some closure for the Calhoun family as we honor the memory of little Dominick.”

House Bills 5562 and 5563 establish penalties for committing child abuse in the presence of another child, which is not currently considered a component of the crime.

“Updating these laws gives the courts the tools to properly punish criminals who commit child abuse and sends the message that what happened to Dominick Calhoun will not be tolerated in Michigan,” said Lori, R-Constantine. “We are determined to better protect our children from child abuse and I believe this has been accomplished under this legislation.”