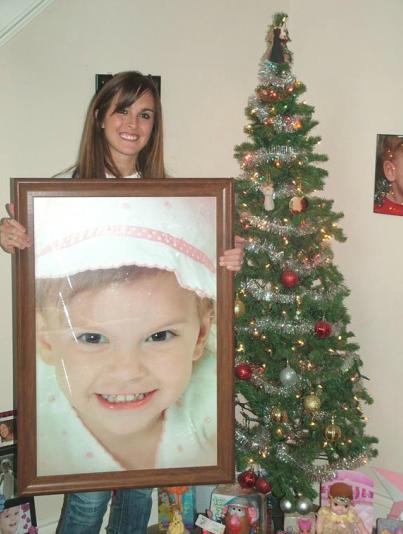 A Christmas tree standing in the corner of former Oxford residents Chico and Lynette Furneaux’s home in Lapeer County serves as a reminder when the joyful laughs and cries of a 2-year-old could be heard throughout the house.

They had no idea putting up a Christmas tree would be the last activity they would enjoy with their granddaughter, Lily Furneaux-Wolfenbarger and her mother Lauren, before they dropped Lily off at her father’s house on Saturday, Nov. 20.

“That tree was the last thing she did the night before we took her over there,” Chico said. “All the bulbs were down low because she decorated it, and it will be there forever.”

On November 20, 2010, the Furneaux’s lost their granddaughter after she was allegedly sexually assaulted and killed by her 28-year-old stepmother Renee King, of New Haven.
King is being held without bond in Macomb County Jail after she allegedly used multiple objects to sexually assault her stepdaughter before striking her in the head with an unknown object, killing her, according to police.

Now Lauren and her family are left with nothing but memories of a wonderful little girl with a bright smile to fill those silent hours.

But they have not wallowed in Lily’s death and allowed it to be in vain. Lauren has used he daughter’s story to begin to promote the awareness of child abuse.

“We want to save children’s life in Lily’s name,” Lauren said. “I don’t want her to have died in vain…it was too late to save her, but it is not going to be too late to save other children.”

“Lily was all of our world. It’s been hard and has been a minute by minute thing, but we know we were left here by God to go on and save other children’s lives and we are going to do that until the day we die,” Lauren added.

That is why she and her family have begun to promote awareness for childhood abuse.

“It seems like people want to sweep it under the rug and pretend it doesn’t happen,” Lauren said.

Using the “Justice for Lily” Facebook page, information gets posted about upcoming fund-raising events for local business who specialize in helping abused children.

“All of them go to help other children, and we just want there to be a huge turnout at all of them.

Upcoming events include an Acappella concert at Central Michigan University on Sunday, April 17 beginning at 3 p.m.

The theme of the concert will be centered around the television show “Glee,” which was one of Lily’s favorite shows.

“She loved music. Glee was her favorite show and she would sit there and watch the same music over and over again,” Lauren said.

Proceeds from the event will go towards the Problem Pregnancy Center in Oxford.

They will also be having a benefit dinner on Saturday, May 14 in honor of Lily’s birthday. Even though tickets for the event are sold out, they are still in need of silent auction items, which can be dropped off at Laura Lee Salon, located at 4 W. Burdick in downtown Oxford.

Proceeds from Lily’s birthday dinner will go towards the CARE House of Oakland County.

“People are just opening their hearts,” she said. “We get phone calls everyday saying I have an idea for a fund-raiser and it’s amazing the love that people have in their hearts.”

In additions to fund-raisers, a free skating rally is held once a month at the Lapeer Skating rink, located at 2100 N. Lapeer Rd.

“It lifts us up so much to see the kids out there having fun,” Chico said.

Since April is child abuse awareness month, she has dyed a few strands of her hair blue and even dyed one of the family’s dogs blue to bring awareness to the cause.

Lauren said she didn’t realize how big of a problem child abuse was until after Lily passed away.

“We didn’t know how big it was until it happened,” Lauren said. “It has really affected us…and has just opened our eyes to what goes on in the world.”

Not only has the “Justice for Lily” Facebook page been used for spreading the word about upcoming events, Lauren said she posts memories in order to “get her smile across the world because she had the most beautiful smile.”

She could not believe the amount of support she has received from complete strangers.

When “Justice for Lily” first joined Facebook, the initial goal was to get 1,000 supporters, according to Lauren. “We wanted 1,000 members and we got that, so we upped it to 5,000 and we got that a few days later.”

Now their goal is to get anywhere between 15-20 thousand supporters by the next court date, which is scheduled for Wednesday, April 27 and Thursday, April 28.

Complete strangers post messages of encouragement for the Furneaux’s and give touching stories of how Lily’s story has impacted their lives.

“There are people who write every day on the wall, saying I never knew Lily, but I feel like I did and I love her so much,” Lauren said. “Those are the people that keep us going.”

Lauren added it just wasn’t just local individuals who have left messages of support. She has had people from England, Australia, South Africa and India post and have even ordered the Justice for Lily t-shirts..

“People that we never knew have opened their arms and do whatever they can to help,” she said. “The people that Lily’s life has affected, it is just amazing.”

Lauren said if anyone suspects incidents of child abuse, let the authorities know right away and let them know.

“They will come out and do something right away,” she said.